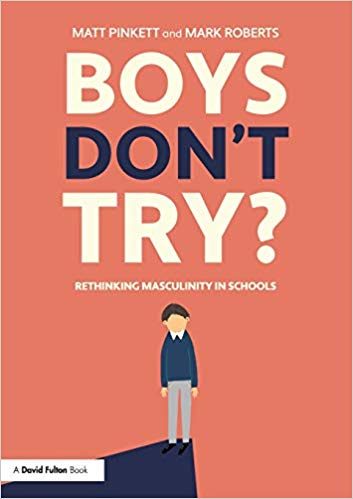 Exploring gender differences in education forms a key part of the Sociology specification, in particular looking at explanations for gender differences in attainment. It is well documented that boys under perform at all stages of primary and secondary education in comparison to girls, and in Sociology we explore possible sociological explanations for these differences. It is an area of Sociology that I am particularly passionate about and the insights that students provide when we discuss this topic are endlessly fascinating!

As a result of this attainment gap, schools up and down the country have invested time and money in training aimed at raising boys’ attainment. Indeed, I have sat through a number of well-intentioned staff INSET sessions during my many years as a teacher, where I have been told that boys and girls learn differently, that boys thrive in a competitive environment and that I should consider ways to make my subject more ‘boy-friendly’. However, simply looking around my classroom at the wonderfully different characters I had in front of me suggested these solutions were not really solutions at all: boys are not all the same.

As such, I was interested to read Boys Don’t Try: Rethinking Masculinity in Schools by Matt Pinkett and Mark Roberts which examines key research in this area and encourages teachers to reflect on how they define masculinity. Each chapter has a three-part structure: stories, key research and practical solutions. Chapter One focuses on some of the most prevalent myths about teaching boys and their engagement with learning and how these myths can actually be damaging to boys education.

Here Roberts discusses how, like many of us, he bought into the idea that boys like competition and that by making his lessons competitive he was making boys more motivated to learn. WRONG. Instead this ‘motivational tactic in many cases has the opposite effect’. Supported by research by Carolyn Jackson, the strategy of increasing competition in an attempt to engage boys is ‘likely to exacerbate the adoption of defensive strategies on the part of many boys’, such as not putting any effort into their work in the first place.

Here Roberts explores a number of reasons why this is problematic. One reason is that boys get bored of things that interest them eventually. Willingham (2009) in Why Don’t Students Like School? states:

‘I don’t think content drives interest. We’ve all attended a lecture or watched a TV show (perhaps against our will) about a subject we thought we weren’t interested in, only to find ourselves fascinated; and it’s easy to get bored even when you usually like the topic… The content of a problem… may be sufficient to prompt your interest, but it won’t maintain it.’

Also, not all boys like the same thing and assuming that they do reinforces stereotypes and narrows definitions of what it means to be a boy. Limiting boys’ exposure also has the clear knock-on effect of preventing boys from building cultural capital and promoting dominant ideas about masculinity.

Despite the continued debunking of the learning styles theory, the notion that boys benefit from kinaesthetic activities persists. Willingham (2009) states:

‘Dozens of studies have been conducted along these general lines, including studies using materials more like those used in classrooms, and overall the theory is not supported. Matching the “preferred” modality of a student doesn’t give that student any edge in learning.’ As a result, Roberts states that ‘boys continue to wander and fondle for no good reason.’

As stated in the book, the solution is simple. Teach boys in exactly the same way you teach girls. High expectations, high challenge, no gimmicks, no shortcuts.

Other chapters consider a range of topics from boys’ mental health to teacher’s expectations of boys to the effects of peer pressure. A fascinating read!