In 1995 I was sitting my own GCSEs and two years later in 1997, my A-levels. At 6th form college I distinctly remember being able to ‘book the internet’. ‘Booking the Internet’ was something we could to do, once a fortnight. There was one computer in the library that had Internet access and for half an hour you could reserve this solitary machine and browse to your heart’s content. Of course there was very little of interest to actually find and nothing of educational use that wasn’t also available at hands reach from a book just metres away. The Internet/Education relationship was in its infancy at this time.

This is a story I regularly share with students, if only to highlight that when I was a learner, exam specifications, mark schemes, examiner reports and past papers were privy only to the eyes of my teachers in the form of dusty, paper copies. Today all this has changed. There is open access to all this invaluable material to any interested party via exam board websites. When I hear the inevitable August headlines that grades have risen once again I don’t share the typical media response that standards have dropped but instead I am mindful that with each passing year it just becomes a little easier to learn, and what is expected of students becomes that little more transparent.

I recently read a perfect analogy comparing the failure to study mark schemes before an assessment with the act of a contractor building a house and only looking at the architect’s plans after the final tile is in place. So, whilst on the topic of houses, this is a great exercise I’ve often used to hammer home the point of the importance of fully understanding the mark scheme prior to an assessment.

Ask students to simply draw a picture of a house. Tell them they have 5 minutes to complete it (or whatever time takes your fancy, it really doesn’t matter) but give them no other instructions. If they start asking questions, just deflect by reminding them that time is running out. It’ll probably look a little like the following. 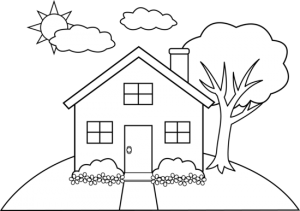 When the time is up, explain to them that they will now be marked, either by themselves or their peers (again, it doesn’t matter which). Now, comes the fun bit for the teacher, and the intensely irritating bit for the students. Start coming up with a completely arbitrary and random list of reasons to award or deduct marks.

“Give one mark if you have a chimney”, “deduct 24 marks if you have smoke coming out of the chimney”, add 5 marks for every window you’ve drawn”, “times your score by 3 if your front door has a cat flap”, “add 2 if there’s a man with a bowler hat peering out of the top left-hand side window…….” etc., etc.

This rarely fails to have the desired affect of frustrating the students as their prized drawing starts to make no logical sense in how it is marked. Which of course is the real point of the exercise. If they knew exactly how you would score their drawing beforehand, they would have had a much greater chance of being successful.

It’s a simple, albeit perhaps childish way of making a point, but a point it certainly does make. And you do the activity over again with the same class, just to reinforce the point each time you are about to do a big assessment. Simply change the random marking parameters each time or try different things to draw such as a map of an island, a farmyard or a superhero.